As of today, Virginia still has its Democratic governor, Ralph Northam, as well as (in order of succession) our lieutenant governor and attorney general. Here’s an update:

Governor Ralph Northam (white) admitted and apologized for, then denied, his presence in a photo on his medical school yearbook page of a man in blackface with another man in KKK robes. But he did cop to wearing blackface once to moonwalk like Michael Jackson. Then in misguidedly striving for pinpoint historical accuracy, Northam referred to slaves as “indentured servants” during an interview with Gayle King on CBS, which she immediately corrected.

Here’s more video of Northam and Gayle King. He comes across to me more as a country boy than a slick, lying politician, while Gayle seems to be fishing for reasons to be offended.

Lieutenant Governor Justin Fairfax (black) was accused of sexual assault in 2004 during a hotel room tryst gone bad at the Democratic Convention in Boston. Then a former college classmate piled on and accused him of raping her in 2000 at Duke. (NOTE: This same woman also accused of rape a student athlete who went on to play for the NBA).

Fairfax acknowledges both incidents happened, but denies they were nonconsensual. The General Assembly wants to investigate the charges before they try to impeach him.

Attorney General Mark Herring (white) out of the blue announced he’d worn blackface while impersonating a rapper nearly 40 years ago in college and has felt guilty about it for years – although it didn’t stop him from immediately calling for Northam to resign for the same offense. WTF?

As the digging continued, also uncovered was that Republican General Assembly Majority Leader Tom Norment (white) helped edit his Virginia Military Institute yearbook, which contained lots of racist photos and text he disavows any responsibility for.

The current session of the General Assembly passed a joint House and Senate resolution acknowledging “with profound regret the existence and acceptance of” – wait for it – LYNCHING. They would like to see reconciliation among all Virginians. Better late than never.

Are you detecting a pattern here?

Out of idle curiosity, I checked to see if my alma mater, the University of Richmond, was racist back in the day. I was forcibly enrolled my freshman year without applying after my father’s job caused a family transfer here from Massachusetts in 1972. I only have the 1973 yearbook because I dropped out in disgust in 1974.

(NOTE: I returned in 1979 to UR’s night school, earned a bachelor’s degree, and have since taught some business writing classes there, so it had a happy ending.)

First, let me set the scene: The University of Richmond is a private college in the city of Richmond. The oldest census I could find was from 2000, when the racial makeup of the city was 57.2% African American, 38.3% white, and the rest other races. Richmond wasn’t any whiter back in 1972.

UR’s undergraduate schools were segregated by gender, with women’s and men’s colleges. There were also night, law and business schools.

In scouring the 294-page yearbook, I found exactly six black students and one Asian. The only dicey photo was of a fraternity I won’t name posing with a Confederate flag. I’ve also blurred the faces in case anybody’s famous now…

In case you’re wondering, here’s me as a freshman. Don’t I look delighted to find myself at a segregated Southern school? 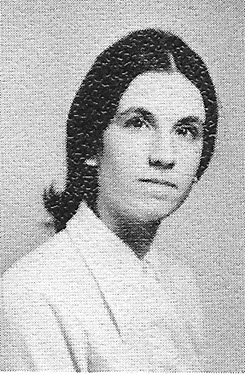 The Richmond Times-Dispatch reported that the 1980 UR yearbook contained a photo of a black man standing on a table with his head playfully in a noose, surrounded by Klansmen.

Richmond was the capital of the Confederacy during the Civil War. Until the mass shooting in a South Carolina church by a Confederacy-obsessed punk that caused the whole country to question this ongoing fixation, it seemed a day didn’t go by where there wasn’t some reminder or “late-breaking development” in the Civil War. To be suddenly shocked – SHOCKED! – about all this racist behavior is disingenuous beyond belief. None of it has ever been covert if you paid attention.

But now, some good news.

When I published my last post, I was in a tiny minority saying that Governor Northam should not resign, but public opinion is coming around to my thinking. A recent Washington Post poll showed 58% support for Northam among blacks.

Without a doubt, all this Klan and blackface stuff is thoughtless, shameful and hurtful. But while we have Trump in the White House, an avowed sexual predator whose tweets and inflammatory insults keep racial hatred roiling, we don’t need to be throwing the babies out with the bathwater, especially now that they’ve had their comeuppance.

This entry was posted on Tuesday, February 12th, 2019 at 1:42 pm and is filed under American politics, Crime & Punishment. You can follow any responses to this entry through the RSS 2.0 feed. You can leave a response, or trackback from your own site.