With Trump, No Surprises Left & I Get Creative with Leftovers

As if it weren’t enough for Trump to be killing us in droves with COVID at home, we learn he’s been happy to let Russia take out our soldiers by proxy in Afghanistan.

It seems Putin pays the Taliban bounties for American hides. And Trump now denies that he and Pence have known it for months.

I’ll concede it’s possible that Trump, with his dwindling mental capacity, has no memory of it. And Pence’s standard line for everything is, “Nobody never tells me nuttin’ about nuttin’.”

And maybe whenever Chickenshit Cheetos Cadet Bone Spurs salutes a soldier, it’s not his secret “Fuck You!” signal to our generals because he’s been helping his BFF Vladdy wipe out U.S. troops without wasting any Russian bullets.

When did we make it OK for presidents who commit cut-and-dried treason say, “You can’t blame me for treason because I’m too mentally incapacitated, but you still have to let me run the country”?

What I find most tedious about this latest crime is everyone’s totally predictable outrage and continuing questions.

If there’s one thing 100% consistent about Trump, whether he’s manifesting any heinous human trait you can imagine, or behaving with such depravity that it defies description, it’s that it’s always EXACTLY as bad as it looks.

Trump has NEVER said or done anything that left anyone saying, “Well, that certainly wasn’t as bad as we feared.”

Moreover, it usually gets worse as you peel away the putrid layers of corruption that envelop everything he touches.

These bounties will be no different. Trump has been green-lighting Putin’s Kill-Americans-for-Fun-and-Profit project.

Don’t be surprised if it’s eventually revealed that Putin pays Trump a percentage on every American kill. Trump’s never been one to pass up an opportunity to demand a cut for his beneficence. This will probably be no exception.

Back on the culinary front, last night I had leftover beef lo mein in the fridge from my favorite takeout place, China Taste. I jazzed it up with onions and broccoli doused in soy sauce and sesame oil, and sprinkled it with bits of boneless pork spare ribs. It turned out delicious… 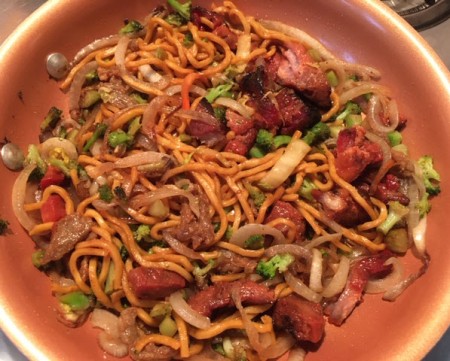 For today’s lunch, I still haven’t bought lunchmeat, and had only a dab of Mediterranean pasta salad left. It swims in olive oil, so I added some diced tomato sprinkled with oregano. Then a few Kalamata olives. And for protein I had some hard salami sitting around, so why not? For that touch of green, capers. Finished off with feta cheese. Voila! Tasty little lunch…

Speaking of lo mein, does anybody know a good recipe for whatever’s on the noodles? I’ve tried several, but have never been able to duplicate that restaurant taste.

France Refused to Trump Itself

France has signaled that the United States under Donald Trump has become a model for the world — to reject.

Yesterday I watched on CNN the celebrations in Paris with tears of relief and gratitude, thankful that, by an unquestionable margin of 32 points, French voters rejected the bigotry and hatefulness of their Trump-in-a-skirt, Marine Le Pen.

Unlike their more gullible American counterparts, the French people weren’t swayed by the last-minute dump of hacked documents and fake news intended to steer votes to Le Pen. This meddling has already been traced to Russian hackers based in the U.S., and Le Pen, during a debate the night before, hinted that it might happen. Déjà vu, anyone?

France has elected an intelligent, inclusive, well-organized centrist young leader named Emmanuel Macron. By comparison, he shines a spotlight on how far we have let ourselves sink.

Our so-called “leader” is a bloated orange narcissist obsessed with his “hair” who squats in the White House and tries to govern via demented tweets. He aspires to bromances with every brutal despot on the planet, and imagines himself the greatest ruler in history.

In reality, Trump is bilking our treasury to finance his whole family’s lifestyle while they all add to their fortunes through foreign powers who patronize the family businesses to curry favor. For good measure, Trump tries to piggy-back tax breaks for himself and his ilk on every bit of legislation he proposes to Congress. There isn’t enough money in the world to satisfy his insatiable greed.

Earlier this year, Austria and the Netherlands also rejected politicians cut from Trump’s cloth. It’s good to know some countries still have a majority of decent people.

No, wait. SO DO WE!! I have to keep reminding myself that Trump LOST by nearly 3 million votes. The map he can’t stop gloating over shows vast expanses of red covering “YUGE” swaths of unpopulated terrain.

We can thank the obsolete Electoral College for visiting this plague upon our house. Until we get to the heart of Trump’s Russian ties, or he commits enough other crimes to make his removal inevitable — and he will — we’ll have to look to the anti-Trumps governing in Canada and Europe to remember what sanity, integrity, honesty, and justice look like.