May Be the Company Bourdain Keeps

Once again, Anthony Bourdain was nominated for an Emmy, for Outstanding Writing on No Reservations: Haiti, only to lose to some guy named Stanley Nelson who wrote Freedom Riders for PBS.

No Res did take home the statue for best Cinematography (well-deserved and Congratulations!), but lost as Best Nonfiction Series to American Masters on PBS.

Maybe it’s just me, but are you beginning to see a pattern here? Could it be that Tony’s getting no respect because being Travel Channel’s “biggest star” is a dubious achievement? After all, he’s shining among such stellar programming as Truck Stop Missouri, Man v. Food Nation, Mancations, Sand Castles, Ghost Adventures, and Bizarre Foods.

Bourdain has just been named a consulting editor who will acquire 3-5 books a year for for his publisher, HarperCollins, under the Ecco imprint (check out the new logo). Presumably, he’ll also be writing for Season 3 of Treme, and that chef he had working for all his NYC buddies in Season 2 will stop being irrelevant and return to New Orleans.

Bourdain’s career seems to be taking a decidedly literary turn, so he may have to stop treating his writing so dismissively. No longer playing that balls-and-bug-eating Andrew Zimmern’s role model can only be a good thing.

On September 11, Tony did a relaxed, beer-fueled 2 ½-hour podcast with Joe Rogan. Among many things, Tony said he still wants to go to the Congo, but Mozambique is in the cards sooner.

Finally, in the Tony’s Friends Department…

Marge Simpson dreams of being on Top Chef in The Simpsons’ season premier on September 25, and Tom Colicchio makes an appearance. No word on Padma.

And I read this insightful opinion piece at SeaCoastOnline.com about celebrity chefs who pretend to be actors.

Catching Up with Bourdain

No Reservations Season 7 (7 ½?) just wrapped, after a bizarre mid-season do-over of the “big Season 7 premier” to hype the Cuba episode, just as the REAL Season 7 opener Travel Channel tried to sweep under the rug months earlier, Haiti, was earning several Emmy nominations. Way to go, TC!

Bourdain ended up making a few destination tradeoffs, skipping the Congo, Yemen, and Memphis in favor of Chernobyl, Kurdistan, and New Orleans.

No complaints here. Zamir’s always a treat, and I’d rather see Tony get a clean, invisible nuking than chewed up and mauled by bat-sized bugs and crocs on some fetid river through a slimy jungle.

Speaking of New Orleans, I had to leave the room before he popped that pig full of lead. OK, call me a hypocrite because I love pork, but I’ve never eaten it right after looking into its eyes. And why does he always have to rub it in by goofing around with the severed head?

I didn’t see anybody using Pam to cook the fried chicken and other local specialties Bourdain wolfed down. This show airing on the heels of his dust-up with Paula Deen seemed particularly unfortunate.

If somehow you missed it, Tony told TV Guide that Paula Deen is the “most dangerous person to America” for her unhealthy dishes, that her food “sucks,” and several other jugular-aimed zingers.

Paula responded on Fox News that Tony should “get a life,” and Time magazine wrote that she cited “being irritated” as Bourdain’s biggest contribution to America. On the other hand, she did graciously extend him an open invitation to drop by for dinner, and I bet she could cuss him under the table stone-cold sober.

I feel certain Tony didn’t realize he picked at the longstanding chip on the South’s shoulder when he dissed Deen, but he did semi-back down in an interview with NPR’s Leonard Lopate, saying he didn’t mean to sound so personal, crass, and nasty.

Condemning vegans is one thing because Tony walks the walk, but after years of stuffing deep-fried everything, tubular mystery meats, and cream-and-mayo-slathered street junk and haute cuisine alike into his cake-hole, while coasting by on this souped-up junkie/smoker metabolism and a height (6’4”) that could carry another hundred pounds before his neck starts disappearing, criticizing grease-based Southern-style cooking seemed over the top, even for him.

Makes you wonder whom he’ll target next. Alcoholics, perhaps?

The backlash against Bourdain was immediate and, sadly, caused his basic, valid point about obesity to be lost. I read many of the take-downs (including Frank Bruni’s op-ed piece in the New York Times), but I thought the most thoughtful one came from Jessica Levine at AnnArbor.com.

Let’s hope TC lets Layover gain some traction before yanking it after a few episodes until everyone forgets about it, then resurrecting the remnants in mid-2012 like they’re something brand-new.

In this new endeavor, TVbythenumbers described Tony as a “contemporary cultural anthropologist,” which makes him sound a lot classier than his usual tag: “former chef and bad boy.”

Anthony Bourdain will be a guest character on The Simpsons’ next season. Check out his cartoon persona here. For some reason, it’s circa 1995.

Sophia Chang has designed Bourdain destination posters. You can see a few of them here and here.

Tony’s wrote a sweet letter to Josh Homme’s daughter, Camille, after the U.S. Desert NR to explain why he smashed Daddy’s guitar against a tree. You can just imagine what his conversations with Ariane must be like. Oh, to be a fly on the wall.

And here’s a picture of Tony with Cole’s celebrity friend, Lupetto Bourdain, that received 6 paws up at Cats Working, even though Lupetto complained the photographer’s angle made him look chunky. 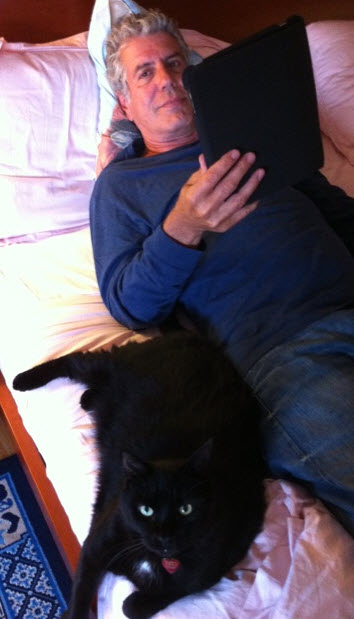 Cole and Max asked me to include this message to Paula Deen and her fans:

“Any man who loves black cats can’t be all bad.”

Anthony Bourdain Inspired by The Simpsons

About The Simpsons, Anthony Bourdain once wrote on eGullet: Far and away the smartest funniest thing on television – and the font of all truth and wisdom.

As I watched a still-mellow Bourdain tearing through the U.S. Southwest in a borrowed BMW in the latest episode of No Reservations, I noticed him invoking The Simpsons several times. Has having a child put him in touch with his inner Bart?

First, in Indio, Calif., while he was watching a documentary called Romance and Sex Life of the Date, he was dead-on with one of Homer’s lecherous sighs, even though in the end he dismissed the film in true Bourdain fashion as “not as good as Debbie Does Durian.”

At Cooperstown, Alice Cooper’s restaurant in Phoenix, while eating Randy Johnson’s Big Unit (an incredibly long hot dog), he briefly went into one of Homer’s typically donut-inspired trances, muttering, “Ummm, must rebel against parents, must wear only black.”

He also let his inner Bart shine through a couple of times, as in Texas when he cruelly challenged newly returned cameraman Jerry (who apparently had been traumatized by the Beirut episode) to eat a 72 oz. steak in 60 minutes, then sat there gloating as Jerry stuffed himself, but failed. Welcome back!

Then when he toured a desert facility housing a huge preserved bomb, he revealed antipathy toward the Swiss, which he just explained on his blog. Reaching for the bomb’s launch button in true Bart style, he said, “Eidelweiss this, you yodeling freaks!”

Then, in a shameless play on Homer’s description of the French as “cheese-eating surrender monkeys,” he called the Swiss, “neutral, cheese-eating, peace-monkey Cuckoo-clock makers.”

They say imitation is the sincerest form of flattery, but I’ve always expected Homer Simpson would someday do Bourdain, not the other way around.