Rats Risk Their Lives to be Useful

The Chinese Year of the Rat, which ends January 25, 2009, proved lucky for vermin. African Giant Pouched rats have two new career paths, although one is kind of kamakazi.

In Mozambique, rats in cute little harnesses and leashes (just like the red one Yul got for his aborted attempt to meet Santa) sniff out vapors from old landmines. Their noses are more sensitive than mechanical devices, and they’re so light on their feet, they don’t trigger explosions. 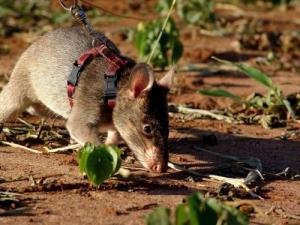 In fact, they’re making dogs, who could do this job, look oafish and inept.

Humans are so excited, they’re considering using rats to find landmines in other parts of Africa, Asia, and Europe. I personally have no problem with exposing rats to this sort of danger, but I would caution people against getting carried away.

You may train a rat to walk on a leash, but he’ll never be your friend. Don’t forget who brought you the Black Plague in the Middle Ages.

In Tanzania, rats are detecting less-than-microscopic traces of tuberculosis in human saliva samples. That must make for nice chit-chat at rodent cocktail parties:

“And what do you do for a living?”

Rats are much cheaper than sweatshop labor. When a rat finds what he’s looking for, he scratches, and is rewarded with a piece of fruit or a nut.

You may wonder, if the rats are so smart, why haven’t they realized they can just scratch and get the treat because humans can’t immediately tell if the rat’s done the work?

Here’s what rat trainer Bart Weetjens thinks: “That would be human behavior. The rats are more honest.”

If you’re interested in adopting one of these rodents (no, I’m not kidding), here’s the site for you.