Bush Missed a Prime Cat-Op with the Pope

George Bush blew a golden chance to show solidarity with Pope Benedict XVI. All he had to do was invite the pope to crawl under one of the White House beds to meet India, the family cat. 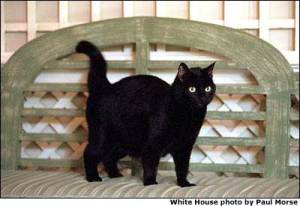 India’s the only member of the Bush family who would appeal to the pope. She might have even persuaded the pontiff to grant absolution to Laura for trying to upstage him with that white suit she wore (a no-no in papal etiquette) the day he wore white vestments himself to greet the crowd on the White House lawn.

If Laura had any sense, she’d at least have left the suit out on the bed that morning to give India a chance to cover it with black cat hair. The pope would have appreciated that.

But India was nowhere to be found in any reports of the pope’s White House visit. Only that publicity hound Barney, or his cohort Miss Beazley, seemed to be under foot. India apparently stuck to the no-show policy she’s followed during the entire Bush administration.

I did learn a few trivia tidbits about the elusive First Cat from her sparse Web page:

India likes to hide from her owners. No surprise there. Who needs guilt by association?

India’s nickname is “Willie” because the Bushes named her after the former Texas Ranger baseball player, Ruben Sierra, who was called “El Indio.” I’m not getting the Willie connection from that. Maybe Willie is “Ruben” in Spanish?

The White House Goes to the Dogs

Those publicity-hungry First Dogs, Barney and Miss Beazley Bush, have struck again. Their “Barney Cam” on the White House’s Web site just premiered another Christmas video. It features the whole Bush clan, touting George’s intention to blow $1 billion of other people’s money on the nation’s national parks over the next decade. 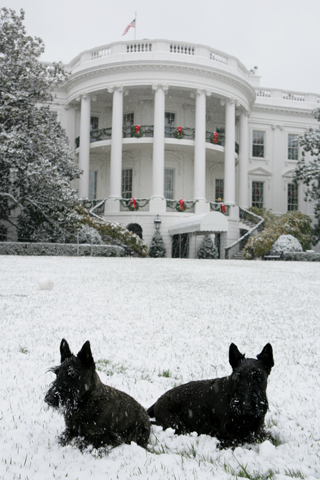 I don’t think that’s a bad idea. It’s just that any time Bush hatches a scheme that sounds unselfish, most of the money ends up in his friends’ pockets.

In the video, the dogs even had Tony Blair talking to them, which just goes to show the pathetic lengths some former prime ministers will go to get their faces on camera.

The obsessively reclusive cat India, aka “Willie,” managed to snag a two-second walk-through cameo. In the closing credits, they billed her only as “kitty,” without even a capital “K.” It’s no surprise that Barney Cam’s operators have no idea what her name is, since Laura and the twins carried on like those two dogs are their only pets.

As media personalities, Barney and Miss Beazley look like a pair of sooty dust mops without handles. The most entertaining thing Barney did was run away when Bush called the White House grounds a national park. He was probably scared of being fined for lifting his leg on protected trees.

The dogs want to become junior park rangers when they leave Washington, and they’ve already got khaki jackets to wear on the job.

With two wars dragging on, the economy poised on a banana peel, and Republican skeletons falling out of every closet, it’s no surprise to find out that the White House has gone to the dogs.