Late yesterday afternoon I got one of those shocks that feels like an elevator going into a sudden plunge when I read this Page Six article announcing that Anthony Bourdain and his wife Ottavia have been separated for some time.

I’d noticed Ottavia seemed scarce on Twitter. And Tony didn’t wear his wedding ring through most of Parts Unknown last season, but I told myself it was all jiu-jitsu-related.

Today, their separation is all over the media. MSN, E! Online, Us Weekly, even the Daily Mail in the UK. But they all just repeat Page Six without additional detail.

Thinking back, I don’t know the exact date I first discovered Anthony Bourdain, but I stumbled upon an early No Reservations on Travel Channel one night and was instantly charmed by his looks and wit.

I had no clue he was a writer until I found A Cook’s Tour at a remaindered book sale. On its cover I learned Kitchen Confidential had been a bestseller. I’ve been in hot pursuit of every book he’s published and have read them all to date. And seen every episode of his four travel series (A Cook’s Tour, No Reservations, The Layover, Parts Unknown). And his lamentable cooking competition, The Taste.

My first dedicated post in Cats Working on him was about his 2007 No Res Christmas special. It’s apparent I knew quite a bit by then, and Ottavia was intriguing me. I finally found her in February 2008. Thus began my regular chronicle of the Bourdains, which led to several personal encounters, most recently when he came to Richmond in 2013.

But sites like Eater and Grub Street began stealing my thunder and getting all the best scoop straight from Bourdain himself, so I stepped back. But I never lost interest.

I will declare with no reservations that Cats Working pioneered coverage of Anthony Bourdain before anyone else was paying much attention. If you search the archives, you’ll find a ton of his history, professional and personal.

I will try to learn more on this unfortunate development, but this post will give any Cats Working die-hard Bourdainiacs a place to comment. Tony has written about being at loose ends before he met Ottavia. This split, real or not, is no picnic for them, so please be kind.

Tony did appear to be alone on the red carpet at the recent Creative Arts Emmy Awards, where Parts Unknown won its fourth consecutive Emmy for Outstanding Informational Series or Special. 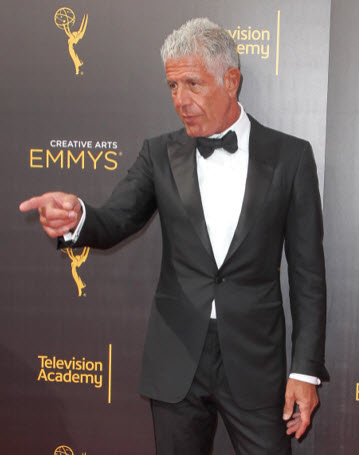 Bourdain was nominated once again for Outstanding Writing for a Nonfiction Program (Borneo), but lost to a Netflix show, Making a Murderer.