I didn’t go to my parents’ cookout. I don’t know if they still had one, or if I ruined it. My sister was invited, so my guess is they did get together for lunch. Probably a quick one — on holidays Sis and her boyfriend usually have other obligations — so they weren’t together for too long. That will be their justification that it was all fine and I’m a bitch.

Meanwhile, on American Independence Day, I’m all Norwegian, or norsk, as they say. I’ve stuck with Duolingo. Initially, I was whipping through lessons so fast that I temporarily achieved Duolingo’s highest status, Diamond League.

But I had covered too much and I stopped retaining most of it, so I went back to Lesson 1. That’s when I discovered each lesson has four levels with lots of repetition and drilling, which was exactly what I needed. I also found grammar explanations and vocabulary lists. So, now I’m building a better foundation. However, Duolingo still makes you question your comprehension with nonsense like…

Nei, gitaren min gråter ikke.
(No, my guitar is not weeping.)

Who measures cats in bananas?

Speaking of Fuglen, he may be plotting something. This morning I found this shady gathering (mouse, Fuglen, Rowdy Rat, and Tony’s balding blue sparkle ball, which had migrated from the bedroom) on the kitchen rug… 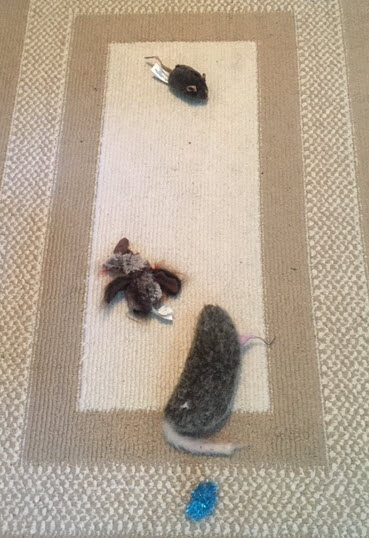 But back to norsk. When I took up Norwegian in 1992 while dating a Norwegian, I asked him to bring me a book from home by any American author so I might buy the English edition and have the translation while I practiced reading.

He brought me Garrison Keillor’s En Rolig Uke I Lake Wobegon (A Quiet Week in Lake Wobegon), originally published in 1987, with Norwegian translation in 1988.

Here’s where it gets weird. Remember, 1992 was pre-Amazon, or really pre-online shopping anywhere. I never found that book in any store, even by comparing the first page of text, whose gist I got, with every Keillor book I came across. Since the Norwegian edition was too advanced for me, it has sat on my shelf all these years.

The other day, I pulled it out and was gobsmacked to find that I had somehow missed clearly written at the top of the copyright page: Originalens tittel: Leaving Home.

Amazon had THAT book…

Keillor wrote a much shorter foreword for the norsk edition, and some of the stories have titles as stretched as the book’s itself, but it does look like a valid translation.

So my next project is to read a whole Norwegian book. Didn’t former presidential candidate Pete Buttigieg once say that’s why he learned Norwegian?

They say when you really absorb a language you stop translating it in your head. I hope that’s where I am by the time I get to Slutten (The End).