People, between us, I’ve had a good run with the horses and thought last year was my last year. But since I just sailed through my 19th birthday on April 11, I’m happy to be here to kick off another Triple Crown season with the 2019 Kentucky Derby.

(Maybe Karen can forget how much she hates Trump while we watch the “greatest two minutes in sports” together.)

The odds-makers’ favorite was Omaha Beach, who got scratched the other day when his cough turned out to be an entrapped epiglottis. He had minor surgery this morning to remove a loose flap of skin in his throat and should be fine in a few weeks, but he’ll never wear the Triple Crown.

This leaves Omaha’s jockey, Mike Smith, also out of the Run for the Roses. Smith won the Derby last year on Justify and was hoping do make it a double.

Today, Haikal (Jockey Rajiv Maragh, odds 30-1, post position 11) got scratched because he has an abscess on his left front hoof. Since no more horses qualified for the Derby, only 19 will be running, and the 10 horses that were to Haikal’s left will shift over one post position so nobody runs against the rail.

Omaha Beach was trained by Bob Baffert, that guy always in white who looks like my Mini-Me, but Baffert has three other horses to spare, including the humans’ new favorite Game Winner (Joel Rosario, 9-2, pp 16), as well as Improbable (Irad Ortiz Jr., 5-1, pp 6) and Roadster (Florent Geroux, 5-1, pp 17). If one of Baffert’s horses wins, it will be his sixth Kentucky Derby and tie him for trainer with the most wins in the race’s 145 years. 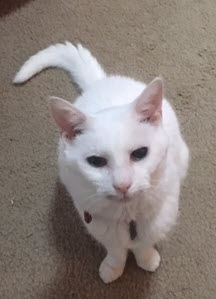 A Japanese horse came over this year. Master Fencer (Julien Leparoux, 50-1, pp 15) is considered the fourth best horse in Japan, and the only horse willing to make the long trip.

As for my picks, Improbable does look pretty good. Of five previous races, he won the first three and came in second in the two most recent. It’s time he chalked up a third-place finish.

But I can’t ignore Game Winner. He won the first four of his six previous races, and most recently placed behind Omaha Beach and Roadster. If he’s in the mood to race, he could be a problem.

The way Baffert likes to run his own horses against each other so much seems a bit twisted. I’ll bet he stirs up a lot of shit-talk in the stalls back at the stables.

As always, keeping paws crossed that all the horses cross the finish line safely. And may the best horse win.

This entry was posted on Friday, May 3rd, 2019 at 2:51 pm and is filed under Animals, Sports, TV. You can follow any responses to this entry through the RSS 2.0 feed. You can leave a response, or trackback from your own site.