Some new information about Anthony Bourdain’s last months has been out there in an extensive interview by Howie Kahn in the Wall Street Journal, but I only recently found it.

It was published online March 28 under the title, “Anthony Bourdain’s Globalist Mission.” (I got to view it once, then got blocked for not being a subscriber, so take your chances.)

A print version published in April was entitled, “The Man Who Ate It All.” These are the bits new to me that I gleaned from it.

Tony was living alone on the 64th floor in a Midtown Manhattan apartment with floor-to-ceiling windows providing views of the city and the Hudson River.

At 11:30 a.m., he was already drinking beer (and smoking). It must have been early January when Trump called African countries “shitholes” because Kahn described Tony’s January 17 appearance on The Daily Show with Trevor Noah as if he were there.

Parts Unknown was the highest rated cable news program in its time slot and nominated for 25 Emmys, with five wins.

Tony said, “Am I searching, am I seeking, am I always looking for something more? Yes! I do this for no other reason.”

He had hung photos of Fidel Castro and Iggy Pop on the walls, but his bedroom walls were bare. Perhaps that’s where he was planning to hang his newly acquired paintings from Jacques Pepin and “The Sky is Falling. I’m Learning to Live with It.”

Kahn wrote that Tony and Asia Argento “had fallen in love while shooting the Rome episode.” (April 2016) He goes on…

“In retrospect, it was also an extended first date, and one Bourdain thought was coming to an end too soon amid the fascist architecture. ‘It was a very sad scene,’ he says. ‘I think both of us thought it overwhelmingly likely that we would never see each other again.’”

The article said Tony’s marriage to Ottavia was ending, and by the time he met Argento, “he’d given up on the concept of romantic love. ‘I was dead,’ he says.”

This confirmed my belief that the affair began when he and Argento were together in Rome and served as an impetus for separating from Ottavia in September. (In December 2016, he drew up his will leaving the bulk of his estate to daughter Ariane.)

Tony also mentioned the book he was working on, described as…

“A collection of essays, many of which will touch on the theme of loneliness — will be more emotional than anything he’s ever attempted.”

Was it finished enough to publish? Will his co-author Laurie Woolever be able to finish it? Time will tell.

Tony said he was also trying to line up financing for a scripted TV project, but only revealed that each season of it would have taken place in different locales, like New York, Berlin and Tokyo.

The interview ended with Kahn asking Tony if he was ever exhausted and would like more balance in his life. Tony said…

“Too late for that. I think about it. I aspire to it. I feel guilty about it. I yearn for it. Balance? I f–cking wish.”

Tony added that he once told Ariane he might quit his job in a few years to spend more time with her, but she burst into tears, saying, “But Dada, your job is so interesting!”

This conversation may have happened around the time Tony told People magazine that he’d probably “die in the saddle.”

My takeaway is that Bourdain had wearied of his globe-trotting and wanted a way out but couldn’t find one. Argento gave him periodic breaks where he could stay still and be happy for a few days. But then she yanked those out from under him in the most public and humiliating way possible.

It leaves a conundrum for his fans. We loved his body of work and wanted it to keep growing, but it had stopped making him happy. The more we learn, the more his suicide seems to become the inevitable end of his life’s arc, rather than the tragedy of an impulsive moment.

Reader Morgan sent these two photos from Facebook of Tony and Ottavia in happier times, as I prefer to think of them… 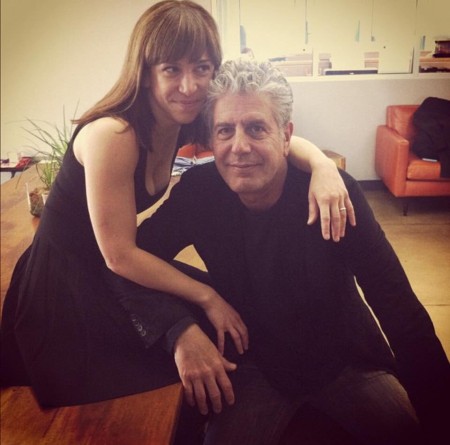 PS: Last week I saw Drugstore Cowboy, the movie about a junkie couple that Bourdain always likened to his marriage to Nancy. Near the end, Matt Dillon (Tony) makes a speech that seems to explain Tony’s inexplicable, fatal attraction to Argento…

“Nobody, and I mean nobody, can talk a junkie out of using. You can talk to ‘em for years, but sooner or later they’re going to get hold of something. Maybe it’s not dope. Maybe it’s booze. Maybe it’s blue. Maybe it’s gasoline. Maybe it’s a gunshot to their head. But something, something to relieve the pressures of their everyday life, like having to tie their shoes.”

Whenever someone dies, their raison d’etre is instantly frozen in time. They can add nothing to their persona or philosophy of life. Those left behind can only dissect what the person ever did or said to form a conclusion about who they were and why they’re gone. We’ve reached that point with Bourdain, and he would hate it.

This entry was posted on Wednesday, July 11th, 2018 at 2:18 pm and is filed under Bourdain, Film, Travel, TV. You can follow any responses to this entry through the RSS 2.0 feed. You can leave a response, or trackback from your own site.