O’Reilly May Thank Trump for Getting Him Fired

Fox News bravely cut loose its darling douchebag, Bill O’Reilly, after more than 80 advertisers stampeded for the exits upon hearing O’Reilly’s despicable behavior toward women goes back many years and has cost him and the network $13 million in hush money.

O’Reilly’s ratings actually rose during all this, thanks to the loyalty of staunch family-values fans who love wallowing in depravity they pretend to abhor.

I think O’Reilly could have weathered this scandal if Donald Trump had kept his mouth shut. But you know Trump. If he sees an opportunity to slither onto someone else’s headline, he doesn’t hesitate.

Having the Pussy-Grabber-in-Chief  say he didn’t think O’Reilly’s long history of boorish, threatening behavior constituted “anything wrong” was probably the last straw for many women. They turned out in droves to vent their rage at all such behavior and call for O’Reilly’s head on a platter, because it’s the only head available on the menu at the moment.

Now, when just desserts seem to be in extremely short supply, it was highly satisfying to wake up this morning to the news that O’Reilly got the axe while vacationing in Italy and shaking hands with the Pope. His display of piety proved to be too little, too late.

I’m sure we haven’t heard the last of Bill O’Reilly. He’s one of those guys who will feel world events aren’t complete without his particular spin on them, and he’ll turn up somewhere, on talk shows, radio, or online.

What’s impossible to tell is if O’Reilly’s departure will have any lasting impact on the culture of demeaning women that’s apparently ingrained at Fox. Having one less pompous blowhole there can only be an improvement.

BONUS: I’m not alone in feeling the Trump effect. While researching this post, I found this commentary by AOL’s editors.

What did I just say about the consequences of praising Donald Trump for dropping bombs on Syria?

While everyone sat around trying to figure out if Trump has any coherent long-term plan to actually help the Syrians, in his typical ADD style, Trump lost interest in Syria within days and dropped a bomb on Afghanistan.

Not just any bomb, but the “mother of all bombs,” a 21,600 lb. monster carrying the equivalent of 11 tons of TNT. They say you could see the mushroom cloud from 20 miles away, which must have given Trump the biggest boner of his life. Too bad Melania was in New York.

How effective was the bomb? So far, no reports of civilian casualties, which is miraculous. But it only took out 36 ISIS fighters. That’s about 610 pounds of TNT per fighter.

And the bomb itself cost about $16 million.

American taxpayers just killed 36 terrorists for $444,444 apiece, and that doesn’t include fuel for the plane. Trump has said he LOVES spending other people’s money, the more the better. Launching indiscriminate attacks anywhere he thinks he sees a squirrel, wasting military resources and millions of dollars for minimal gain, is one of the few campaign promises he’s actually following through on.

So what’s next? Trump’s been talking smack about North Korea, and they’re saying if Trump wants nuclear war, they’ll be happy to oblige him.

Will Congress stand there and let Trump obliterate the planet in his sick obsession with diverting attention from his bromance with Vladmir Putin? That’s all these provocations in the Middle East amount to.

Trump has no convictions and no strategy for resolving any conflict anywhere. He just likes bombing things because he thinks it makes his dick look bigger.

What we’ve got is an egomaniac with no moral compass who won’t hesitate to kill masses of people — innocent or not — just for attention. Even better if anyone praises him for it, especially if it’s Putin.

Another well-armed maniac, Kim Jong Un, is playing “Chicken” with Trump right now, and Trump won’t let North Korea come out ahead. If someone doesn’t find a way to pull the plug on Trump’s new bomb habit, now that he’s proven beyond a doubt that he thinks war is a game and he can’t be trusted with the nuclear codes, we may all be toast.

Is Russia’s Disgust with Trump Real?

By attacking Syria, Donald Trump managed to literally drop his biggest boom-boom yet for the world to admire. Some of our own pundits came down with the vapors, swooning that Trump was presidential at last. His approval rating even rose a few points.

Remember, people. Praise is this guy’s crack. If you give him positive reinforcement for bombing things, he’ll have us in World War III by Memorial Day.

I was disgusted by Trump’s scripted outrage over Bashar al-Assad killing babies. Trump has never shown empathy for the suffering of children or anybody else, and you could see none in his eyes as he read from the teleprompter.

If he’s concerned about Syrian children’s welfare, why is he so intent on banning them and their families from finding refuge in this country?

You know Trump’s being cynical whenever he invokes God because Trump thinks he’s superior and more powerful. He’s president, not God. And God never got 306 Electoral College votes.

Trump’s 59 missiles barely put a dent in that Syrian airfield, so it was business as usual there within 24 hours. Senator Lindsey Graham described it as Assad’s “F-U” to Trump.

Meanwhile, Secretary of State Rex Tillerson called on Russia to choose between Assad and the U.S., which must have given Putin a good laugh. Tillerson’s in Moscow today, getting an earful about the feckless, reckless administration he serves.

But I can’t help wondering if all this isn’t just Putin and Trump wrestling for show, colluding to bury the intensifying investigation into their real relationship.

If so, Putin threw Trump this Syrian bone for nothing. After Trump’s limp tap on Assad’s wrist, Putin must see that Trump will never be an asset. He’s human Jell-O. His every word is a lie or contradiction of himself. Nobody knows what he believes or what chaos he’ll create next. He’ll do anything for empty flattery. He’s profoundly ignorant and dangerously naïve.

In a word, Trump can’t be trusted. By ANYBODY.

If it’s revealed that Putin cultivated Trump and his team to carry out Putin’s nefarious plots against the U.S., it’s egg on Putin’s face bigly. Trump’s pointless attack on Syria proves he’s a fool who’s flailing minute to minute, bragging and bullying like nobody sees what a scared little man he really is. Sad.

When Did We Elect Jared Kushner?

After discovering that being president eats into his time watching Fox, tweeting, playing golf, and wasting taxpayers’ money feeding his ego with nostalgia rallies all over the country, Donald Trump has dumped most of the job’s heavy lifting onto his son-in-law, Jared Kushner.

Thanks to nepotism gone wild, we now have a rookie 30-something with no government experience making decisions on important domestic matters, whenever he’s not off somewhere undermining our professional diplomats’ work on foreign affairs. 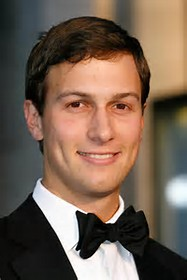 From what I could gather, here’s what Jared currently has on his plate…

I believe Trump tapped Jared for this workload because he sees any man who wants to (and does) bang his daughter Ivanka as a kindred spirit he can totally trust.

Let’s look at Jared’s qualifications. He inherited his father Charles’ real estate business at age 24 when his dad went to prison for witness tampering, illegal campaign contributions, and tax evasion. Charles is now free and back at the reins, and he’s given top jobs in the business to fellow ex-cons he met in prison.

Jared has never attempted any business project without backing from the Kushner family, and the moment in 2009 when he pulled his head out of their ass to marry Ivanka Trump, he took one deep breath and inserted it firmly up Donald’s ass, where it remains today.

I wonder if Trump’s own sons, Uday and Qusay, oops, I mean Eric and Donald Jr., harbor any resentment toward this kid whom Dad has chosen to run an entity far greater than any Trump Organization — the United States of America.

If Jared ever has a question or feels unsure, he can always consult the wisdom of the bloated orange man-baby whom ISIS has astutely pegged “a foolish idiot.”

The cliché, “The blind leading the blind,” has never been more apt.

It seems inevitable that Jared will be unable to bring his plate-spinning act to a successful conclusion. When they come crashing down around him, what will Donald do? Take responsibility for his own inability to lead or delegate duties appropriately, or throw Jared under the bus? Obama could probably answer that.

Just when you think Trump can’t sink any lower, he positions his beloved Ivanka’s husband to take his fall when things fall apart — and Jared doesn’t seem to see it coming.