Devin Nunes Must Go and Paul Ryan’s on Quicksand

Paul Ryan probably gave his blessing for Congressman Devin Nunes (R-Calif.) to sabotage the House Intelligence Committee’s investigation of Donald Trump and his Russian connections. The first time Nunes spoke to reporters, he said he spoke with Ryan before skipping off to the White House to meet with Trump about what he learned from an unknown person with as-yet-unknown  information about surveillance of the Trump team.

However, Nunes scrubbed the fact of meeting with Ryan from every statement he subsequently made as his account of his suspicious actions became increasingly murky upon repetition.

For some reason, everyone in the media except, apparently, Lawrence O’Donnell, missed the Ryan connection, and Ryan so far is keeping his skirts clean.

But all signs point to Ryan-Nunes collusion to protect Trump’s ass and scuttle the House investigation.

Nunes’ own committee members, whom he has treated like mushrooms — keeping in the dark and feeding shit — have had enough of it and are calling for Nunes to recuse himself because they can’t trust him.

Nunes served on Trump’s transition team when some of this Russian canoodling was going on, so Ryan never should have let Nunes have the reins in the first place, unless Ryan’s intent was always a sham investigation.

Nunes’ recusal isn’t enough now, nor should we trust any other congressional politician a with partisan axe to grind to uncover the truth. We need an independent investigation.

After all, they hired Ken Starr to investigate Bill Clinton’s icky stain on Monica Lewinsky’s blue dress, even though it was Clinton’s personal shame and had NOTHING to do with his ability to be president.

Yet now they hesitate when we know the president has deliberately surrounded himself with well-documented Russian tools like Michael Flynn and Paul Manafort, and they may all have been committing treason during and after the campaign. For all we know, Trump’s STILL profiting from his Russian connections. That’s why he won’t release his taxes.

Trump tweeted maniacally about his Russian problem last night, trying to shift the spotlight to his favorite scapegoats, the Clintons. By now, all should recognize that he suffers from pathological projection. Whatever he knows himself to be guilty of, he accuses someone else of doing. 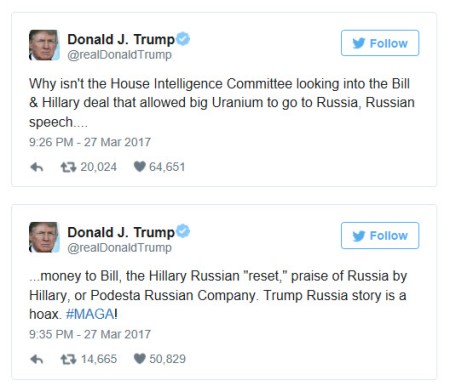 Now he’s living in abject terror of his Russian skeletons tumbling out of the closet at any minute while Putin watches, waits, and undoubtedly has a good laugh at Trump’s bumbling ineptitude.

This entry was posted on Tuesday, March 28th, 2017 at 11:26 am and is filed under American politics, Crime & Punishment. You can follow any responses to this entry through the RSS 2.0 feed. You can leave a response, or trackback from your own site.