Larry Craig, Your 9 Lives are Up

In addition to the police officer in the Minneapolis-St. Paul Airport’s men’s room in June, eight more men have told the Idaho Statesman they had sex or fielded passes from Idaho Senator Larry Craig over a span of 40 years, back to his college days. Their stories can’t be concretely proved, but Craig’s documented travels seem to coincide with the dates. 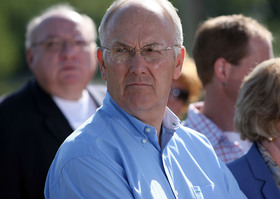 Talk about a guy looking for love in all the wrong places.

Craig still insists the world’s lying and he’s terribly misunderstood. He has yet to give a “straight” answer to why he goes to gay clubs and says and does so many gay things.

He had a bizarre dress code during some of his little trysts – he kept his pants on. Probably to keep from getting caught with them down. But did Monica Lewinsky’s stained blue dress teach him nothing? All it takes is one cell phone camera to catch him with a wet crotch. And he can bet all eyes are trained on his crotch, since he’s made it the focus of his existence.

This guy who’s so afraid of getting caught, according to one of his eight boy-toys, allegedly tried to score a quickie in the Denver Airport men’s room during a layover for a flight to DC – while he was flying with his wife.

But the real irony is that Craig himself made his ex-lovers sing like canaries. They had no problem servicing a closeted gay senator. What set them off was finding out he’s a liar and a hypocrite.

The way I see it, Craig’s got nine turds in his litterbox and no pooper-scooper in sight. The only way out is OUT.